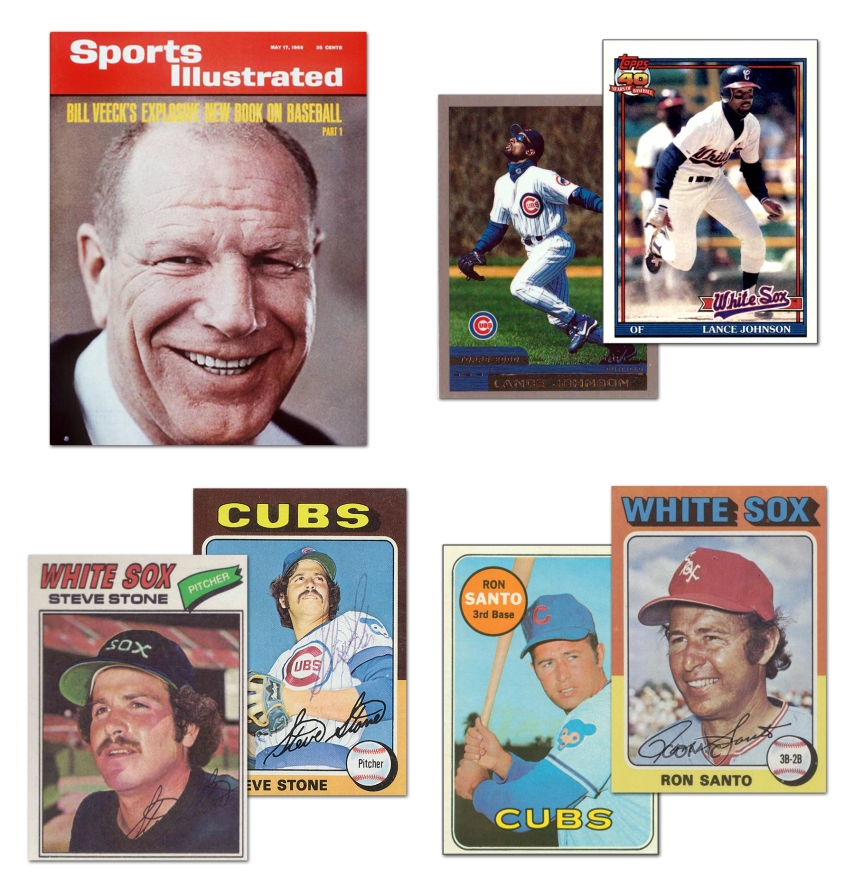 As we welcome 2019, it might be prudent to put baseball’s hot stove on the back burner (redundant, perhaps?) and do some light reading. Sit back with a flaming rum punch and consider these people of the past who share a connection with both Chicago teams – the Cubs and the White Sox.

(Before anyone wails about the omission of people like Moe Drabowsky…when you get your own article to write, YOU can decide who to include.)

“Wait,” you might be thinking, “didn’t he own the White Sox?” Well, yes. The clever and creative Veeck held the ownership reins of the Pale Hose twice (honestly, I’ve always hated that label, but there’s only so many ways to ID a team.)

He first headed an ownership group in 1959, just in time to face off against the LA Dodgers in the World Series (Which the West Coasters won, four games to two.) But health issues forced Veeck to sell his games interest in the Sox just two years later.

He returned in 1975 to the owner’s box. Veeck would often be found sitting among Sox fans in center field, clad in a shortsleeved shirt and using his wooden leg for an ashtray (one stray spark and he would have barely left a leg to stand on.) Tight finances in the world of free agency forced Veeck to retire in 1980.

You might think, “But what about the Cubs connection?” (Geez, you are impatient…) Long before Bill Veeck entered the world of baseball team ownership (along with the Sox, he held the Cleveland Indians and the St. Louis Browns during the Forties and Fifties,) Bill could be found in the friendly confines of Wrigley Field.

His dad, Bill Sr., was the Cubs’ president under Phil Wrigley. Young Bill Jr., was first an usher during games. Noting the outfield wall could use some color, the teen suggested planting a lush ivy on it. More than eighty years later, Veeck’s idea is an iconic feature of the park. He eventually became team treasurer, as well.

I prefer peace. But if trouble must come, let it come in my time, so that my children can live in peace. – Thomas Paine

Peace cannot be kept by force; it can only be achieved by understanding. – Albert Einstein

The most valuable possession you can own is an open heart. The most powerful weapon you can be is an instrument of peace. – Carlos Santana

It is not enough to say we must not wage war. It is necessary to love peace and sacrifice for it. – Martin Luther King, Jr.

Even peace may be purchased at too high a price. – Benjamin Franklin

I think that people want peace so much that one of these days government had better get out of their way and let them have it. – Dwight D. Eisenhower

If civilization is to survive, we must cultivate the science of human relationships – the ability of all peoples, of all kinds, to live together, in the same world at peace. – Franklin D. Roosevelt

Hope is like peace. It is not a gift from God. It is a gift only we can give one another. – Elie Wiesel

If someone thinks that love and peace is a cliche that must have been left behind in the Sixties, that’s his problem. Love and peace are eternal. – John Lennon

Central Standard Time is published by Joseph S. Tortorici who is solely responsible for its content.